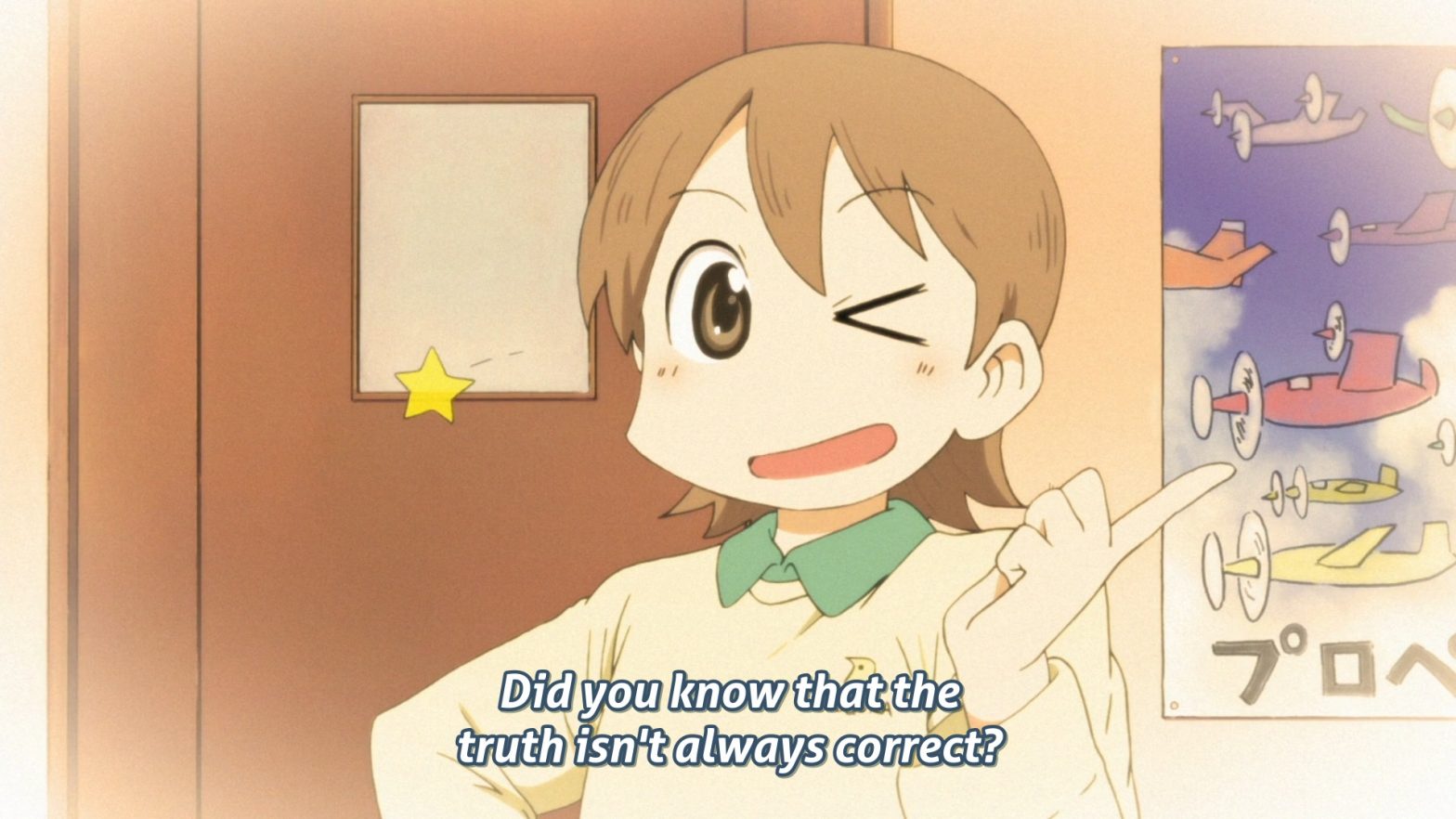 Nichijou is a series that it’s easy to write off as a screwball comedy with beautiful animation and a few touching moments. However, it has a dedicated cult following that seems to have been legitimately impacted by it, and I don’t think it’s for those reasons. I’ve personally found myself going back to clips and episodes of Nichijou on a regular basis. There’s something captivating about it that’s lying below the surface. It’s a bunch of wild, reflective, cute, emotional, silly scenes that don’t seem to have anything to do with each other, but there’s actually a common theme connecting most of it.

If you want to understand a series, the title often holds a key. “Nichijou” (日常) translates fairly directly to ordinary or everyday life. When the title was localized and broadcast on Crunchyroll (before they, unfortunately, lost the rights), they decided on My Ordinary Life. Basically, the title suggests the mundane and the routine. At first glance, the title seems to be an ironic one, considering the content shows people having lives that are anything but ordinary. However, when the series uses the title, it becomes more clear why exactly it’s called Nichijou. The first use of the title comes in a scene in episode 3 where Sakurai stops Sasahara in the hall and asks him what that frilly thing he wears around his neck is. Sasahara, instead of answering (perhaps because he doesn’t know that it’s called a cravat), he compares everyday life to a series of miracles.

Most of Nichijou’s most profound statements tend to be non-sequitur like this, so it’s not surprising that the themes tend to get overlooked. They’re more often than not presented as offhanded jokes. This title drop, however, gives us a hint. A miracle is, by definition, something out or the ordinary. In other words, it seems like it would be the complete opposite of “ordinary life.” What Nichijou aims to do is to bridge this gap between the absurd and the mundane.

A brief discourse here: when I talk about absurdism and absurdist fiction, it’s important to know what specifically I mean by that so it’s clear how it relates to Nichijou. Absurdism is, put briefly, the philosophical idea that the scope of information in the universe is simply too vast for humans to comprehend even a fraction of it, and that consequently, no matter how hard they look for it, humans will never be able to find any true meaning in life. It’s a philosophical field closely related to existentialism and nihilism. Absurdist fiction often focuses on these ideas. If you want other examples of works within the genre, I’d recommend the works of Albert Camus, as he is not only a writer of absurdist fiction, but a philosopher who is credited with the creation of the absurdist school of philosophy. Franz Kafka is also a well-known writer who frequently touches on absurdist themes. If you’re looking for something a bit more modern, the Welcome to Night Vale podcast is also a textbook example of absurdist fiction.

Nichijou seems to have some strong absurdist themes, but it has a fairly strange take on them. Most absurdist works take these ideas and create stories filled with fear, uncertainty, or even misery. However, Nichijou is incredibly optimistic in its presentation of these ideas. It celebrates and revels the strangeness and uncertainty of life, positing that when truth is unknowable, we’re free to seek meaning wherever and however we can find it.

Nichijou is primarily divided between two different trios. There’s Yuuko, Mio, and Mai, who are three ordinary schoolgirls, and then there’s the Shinonome Labs trio, consisting of Nano (a robot girl), Sakamoto (a cat who is able to talk thanks to the scarf on his neck), and the Professor (an 8-year-old girl who invented both Nano and the scarf; often referred to by fans as “Hakase”). However, it is the mundane trio of schoolgirls who often get the most dramatized and over-the-top scenes, whereas the Shinonome Labs trio, despite their absurd nature, often get slower, more reflective scenes. The schoolgirls dramatize their lives because all those small events seem that important to them. Meanwhile, the inhabitants of the lab treat their lives as simple and normal because they don’t see themselves as strange. In both cases, the mundane and the absurd are juxtaposed in the characters’ daily lives.

The entirety of Nichijou is like this, interspersing wild, fast-paced scenes with slow and reflective ones. It does everything it can to throw you for a loop, and then gives you a moment to breathe.

Episode 3, for example, contains these four short scenes placed in ways that track the progress of Sakamoto as he joins Nano and the Professor at Shinonome Labs. They’re all out-of-focus shots, all from the same angle, with only footsteps and some ambient noise audible. Between that and the way they track time, they’re very slow, reflective clips. However, most of them follow or are even placed in the middle of very high-energy scenes. Nichijou has a variety of these types of scenes, from the “Short Thoughts” ones to the “Helvetica Standard” ones. The juxtaposition allows for a moment to reset, and connects the wild and bizarre aspects of life with the calming, centering ones. Once more, it’s that interplay between the absurd and the mundane.

In one of the show’s most famous scenes, Yuuko, forced to stand in the hallway yet again after forgetting her homework, sees the principal wrestle a deer in a bizarre and dramatic battle. Afterwards, she bursts into the classroom, intending to tell the class about what she had witnessed, but after a few stuttered attempts, can only manage “All’s quiet in the hallway!” The narration continues with “That was the truth, from the bottom of her heart. She was neither trying to protect the principal, nor too lazy to explain the scenario. Perhaps she wished to show respect for the two who had just fought.” Yuuko herself doesn’t even seem to understand her actions herself. This is a recurring theme throughout Nichijou: characters witnessing something that they can’t understand or explain, but somehow feeling like they’ve learned something of value anyway. 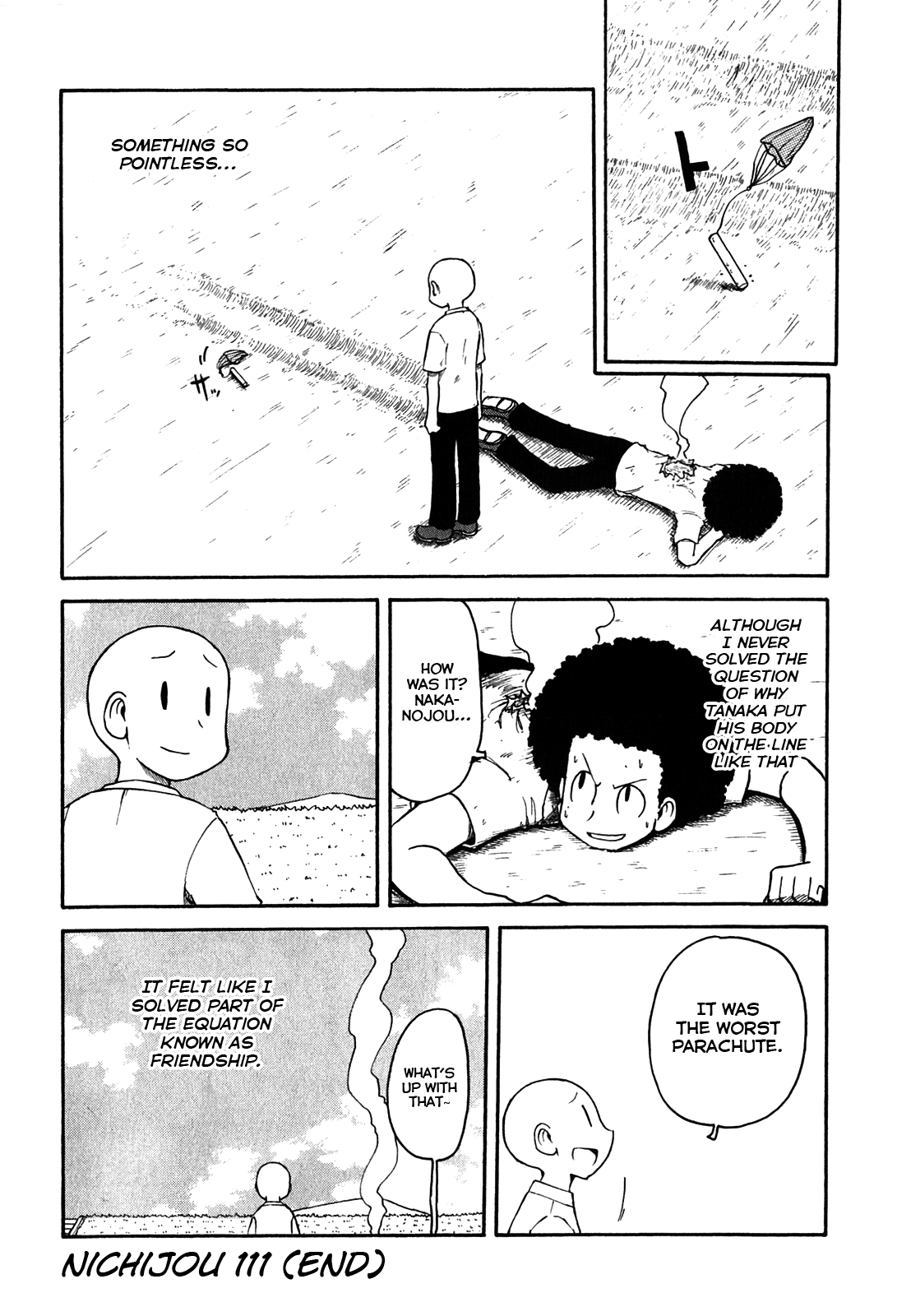 The characters embrace absurdity willingly, and still somehow manage to find happiness through it. 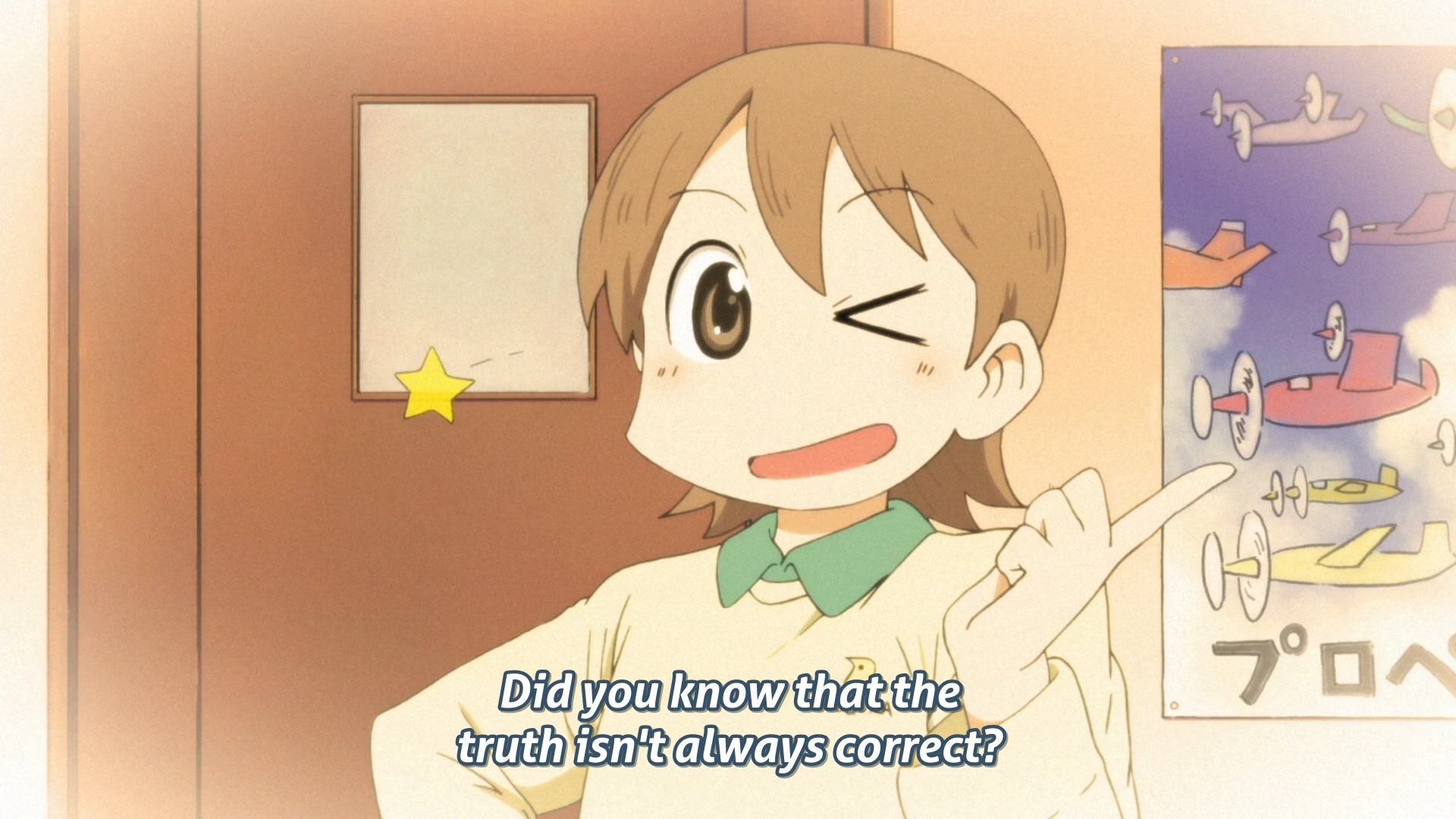 Nichijou also rejects the idea of some universal truth. That is not to say that it attacks any certain belief system. Rather, it accepts all of them.

“All of the world’s truths can be found through science! The underworld, ghosts, and paranormal activity…such things cannot possibly exist! They mustn’t exist…which is why I don’t believe in psychic mediums.” ~Tsuyoshi, episode 5

In several different instances, Tsuyoshi goes out of his way to attempt to disprove psychic mediums, exorcists, and other people with supernatural powers. His motivation is because he is a reasoning person who believes that truth can be proven with science. However, he ends up running into a wall when he realizes that, while the supernatural cannot be proven, it also cannot be disproved. After all, how can you prove that a priest cannot exorcise evil spirits when you cannot put that to the test by providing evil spirits to exorcise? And if something cannot be disproved, how can you say that it’s false?

Nichijou doesn’t contain any supernatural elements. It contains dream sequences and highly exaggerated scenes, but nothing that happens in Nichijou is flat-out impossible. However, whether it’s a principal suplexing a deer, a dog appearing to comfort Yuuko when she’s at a low point, or a boy who only has a mohawk because his hair doesn’t grow on the sides of his head, so much of the show is highly improbable and hard to explain. An eight-year-old girl inventing a highly human robot or a scarf that allows animals to speak seems like the most impossible thing in the show, but the fact that she’s treated as a scientific being rather than a supernatural one allows for the possibility that perhaps the Professor is able to do these things because she just happens to be the smartest person in existence. Improbable? Unlikely? Definitely. But impossible? No. Nichijou always manages to stay just on this side of impossibility.

Shortly after Nano begins attending school, Yuuko follows her home to search for proof that she’s a robot. When the Professor shows her all sorts of cool functions that she’s built into Nano, Yuuko more or less receives confirmation of her nature. Yuuko certainly is thrilled to learn that Nano is a robot. She’s constantly amazed at all her features. However, Nano is so insistent that she’s not a robot that, upon leaving, Yuuko instead tells her that she knows she’s not one. This is a case where, to use Yuuko’s words from a later episode, “the truth isn’t always correct.” Yes, it may be true that Nano is a robot. But Nano doesn’t want to define herself that way. So Yuuko offers her another option: that she’s just Nano. Being a robot is part of Nano’s identity, so it would be true to say that she’s a robot. But it’s also true to say that she’s “just Nano,” i.e., that she can only be defined as a whole identity rather than just one aspect of it. There are two conflicting truths in this sense, so Yuuko chooses the one that she feels to be the “correct” one. In a world where things are so uncertain and unprovable, we ultimately are left to trust our guts as to what is true and right and what isn’t.

Near the end of the series, Mio witnesses her crush being led around by another girl. The situation is something of a misunderstanding, but it still causes Mio to have a complete breakdown. Nano and Yuuko desperately try to distract her, including a non-sequitur from Yuuko about how baseball is fun because it’s unpredictable. However, Mio instead breaks off running. Yuuko follows her in an incredibly bizarre goose chase that includes jumping through a window, shadow boxing, and squeezing between oncoming trains.

At the end of her absurd journey, everyone who catches up to her reacts to the absurd journey she just took, and Mio herself bursts out laughing as she reflects on what just happened.

By calling back to Yuuko’s non-sequitur, Mio sums up her journey, Nichijou, and life itself–because while Nichijou may be fiction, its message speaks directly to all our lives. Even the most mundane and routine moments of our life are ultimately absurd. Because life is unpredictable. Life is unstable. Bad things can happen as easily as good things. Sometimes the good things are taken away from us, and sometimes setbacks result in new opportunities. We can’t predict what’s going to happen in a few months, a few weeks, a few days, or even a few minutes from now. It’d be fantastic if we were omniscient and could face life with some degree of certainty, but we can’t. Our entire existences are strung together by a variety of events that we have no control over. A “series of miracles,” if you will. And that’s what makes life scary.

But that’s also what makes it fun.