In my previous Phantom World posts, I’ve been breaking down the episodes bit by bit and complaining about whatever strikes my fancy, but I’d like to take a moment to talk more broadly about why exactly Phantom World is failing so hard for me.

First of all, I suppose I should answer one important question: why do I care? Why bother tearing a show apart like this? Why get riled up about a show that, overall, is just “on the bad side” rather than “irredeemably awful?” I think it largely comes down to betrayal. I was expecting good things from the series before it was airing, and KyoAni has a pretty good track record. So when it ended up being bad, I got angry. The things you have high expectations for or that become popular are always the ones that are most infuriating.

So on to what’s wrong with Phantom World.

A show doesn’t necessarily need good characters to succeed. Mushi-shi and Mononoke, two shows that are vaguely similar to Phantom World (all are shows that have art as a draw and are a series of episodic or arc-based stories about supernatural beings causing problems), don’t have characters it’s easy to get particularly attached to. Of course, in the case of Mushi-shi and Mononoke, it’s because they only have one or two recurring characters, who largely remain shrouded in mystery. Phantom World doesn’t have that excuse. It has an ensemble cast that the show focuses primarily on, meaning it needs to be driven largely by these characters.

Phantom World’s characters have something resembling personality, but they’re not interesting or engaging, and they’re certainly not fleshed-out. Since a lot of episodes focus on individual characters, you’d think the series would try to explore them in some meaningful way, but nope. We get Reina having tension with her parents. We get Phones feeling isolated and judged because of her power. We have Ruru becoming infuriated with how small she is. We see Kuma-chan struggling with…feeling like she’d be inadequate as a member of the team? Is that what it was? I can’t really remember. But that’s exactly the problem. All of these problems? They get brought up and resolved so quickly that they can barely be considered meaningful. Reina and Kuma-chan’s problems are resolved in the same episode they come up and never show up again. But at least they’re resolved. Remember Haruhiko’s family issues back in episode 4? 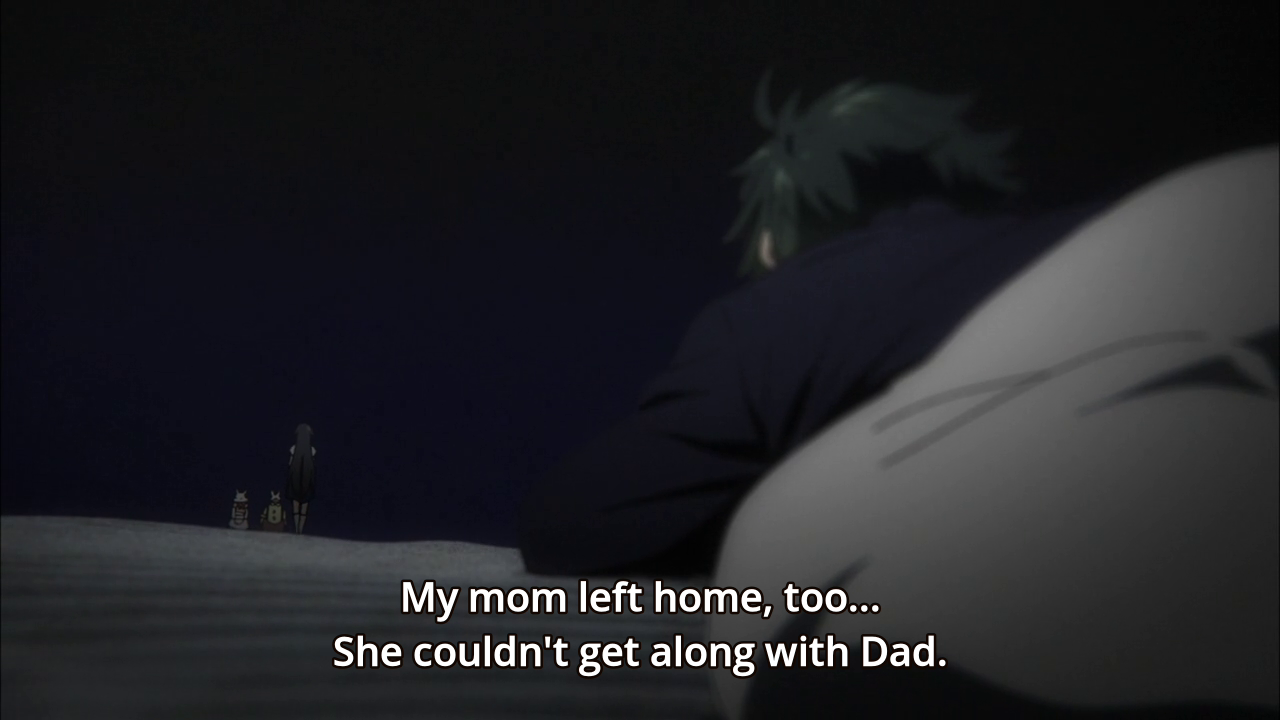 That is the only time they are ever touched upon in the show. It’s pushed aside as suddenly as it’s brought up.

Let’s go back to Mushi-shi and Mononoke for a second. These two shows often deal with a variety of different supernatural beings that behave very differently. However, there always seems to be some form of consistency. In Mononoke, the mononoke must always be revealed by discerning the Form, Truth, and Reason. In Mushi-shi, the different varieties of mushi are occasionally discussed and it’s clear that there has been a lot of research into the different types of mushi within the world itself. Phantom World’s world seems to have no real logic or consistency to it. There seem to be a variety of Phantoms, but we see multiple Phantoms of the same type so they’re clearly not all unique. I can’t remember the exact timeframe off the top of my head, but I think it’s been roughly a decade, perhaps a decade and a half, since Phantoms appeared in this world. And if that’s the case, why has there not been an absolute fuckton of scientific research put into finding out more about them? Have scientists literally written nothing in this time, or have you seriously made your main character someone who’s constantly researching everything but Phantoms?

The powers these kids have are also infuriatingly vague and often flat-out contradictory. Haruhiko has to use blood in order to summon, but he can also use paint instead? He needs his sketchbook, but he also doesn’t need it?

The one thing that seems to be constant is that the Eastern elements (wood, fire, earth, metal, and water) are what the magic system is based around. Apart from that, it seems like anything goes.

There are so many questions I have about the world of Phantom World. There might be a surprising amount of depth there. However, none of it’s coming through, meaning that the biggest question I have is “is this world actually thought-out at all, or just sort of haphazardly thrown together?”

My money, unfortunately, is on the latter.

KyoAni seems to frequently have a Ghibli-esque artstyle, and they’ll frequently make shows that are very whimsical. Chuunibyou and Amagi Brilliant Park, for example, have a sort of childlike wonder to them (with a healthy dose of cynicism thrown in to boot). Phantom World? It seems like it should be whimsical. It looks like the type of show they’d chose largely because of the whimsy. The world looks like the sort of one I should be drawn into and in awe of. But it’s not. It has all the elements of a whimsical world, but none of the execution.

It could be a fanservice show, but it seems to vacillate between taking glee in portraying fanservice and being downright ashamed of it. And the mere inclusion of fanservice (both in terms of sexuality and stock anime tropes) completely shatters any feelings of whimsy that get built up.

4. The Plot, Pacing, and Structure

Did you know that Phantom World has a plot? It’s true! There are recurring threads here and there that are presented as being relevant! I know it’s hard to believe, since it’s been so long since any of that has even shown up, but they’re there! Remember that weird electronic device from episode 2 that’s clearly presented as relevant but has been onscreen for maybe 15 seconds afterwards?

Phantom World is an episodic show. I get that. That’s fine. A show doesn’t need an actual plot to be good. But to use the terms from Ghost in the Shell: Stand Alone Complex, if you’re going to have both Complex and Stand Alone episodes, the complex ones have to be interspersed with the stand alone ones. What Phantom World has done has shoved all the Complex episodes into the beginning, then made every episode a Stand Alone until, presumably, the show will finally pick up the plot threads at the end. At this point, ten of the thirteen episodes have aired. Even if the last three episodes all tell one story, at this point the majority of the show has already been filler.

Despite the blatant fanservice, this is a kids’ show.

I’m serious. This is reminiscent of a PBS after-school cartoon. The kids learn some educational facts to grow their brains and/or learn a simplistic life lesson and everything is resolved by the end of the episode so there’s no continuity. The only difference is that it’s aimed at a slightly older audience.

That’s what Haruhiko’s Exposition Exhibition is about. That’s what all the bullshit trivia is for. It’s to educate. I mean, that has to be it, right? Despite all the male gaze shots, this is a show aimed at young teenagers. Because the only other option is that it’s just trying to make itself sound smarter than it is.

I railed on how pretentious the show is in an earlier post. I don’t think I can add much to it, so allow me to just repeat that wholesale here:

Now, allusions are not inherently bad. I think Psycho-Pass uses them really well. They’re just as blatant as they are in Phantom World, but in Psycho-Pass, it’s all important. Whenever someone talks about an author or a philosopher, it either reveals something about their character or about the ideas presented in a story arc. It’s not just saying “Plato had a theory about ideal, perfect forms,” it’s demonstrating that theory by showing how the idea of something can seem more real than the thing itself. When a character goes on about her favorite Shakespeare works, it reveals something about her psyche, and when she talks about Kierkegaard, it’s because his philosophies are relevant to her point about the nature and purpose of art. All these ideas tie into an overlying theme regarding the idea of individuality within a perfect society. Is it pretentious? Maybe. But it’s pretentious with a direction and purpose. In Phantom World, it’s just to provide the illusion that the show is smarter than it really is. You can tell in the moment that Saussure’s theories of linguistics aren’t going to be in any way relevant to the plot or themes. They’re just namedropping him because they can.

Which leads into my final point, and what I think is ultimately the source of so many of the show’s problems:

There’s nothing cohesive pulling this all together. It’s just a series of short stories that have no connective tissue. It’s not saying anything. There’s no idea present in all the stories. It’s scattered and all over the place.

Well, no. That’s not quite true. There was an obvious theme set up at the beginning of the show: that of perception and illusion. And in fact, that looks like the direction the show is going to be headed in episode 3, when we get a story about how Mai’s faulty perception and unreliable memories keep her from understanding the conflict. The show resolves the conflict in the dumbest way possible, but at least it’s thematically consistent with what the show has already given us. After that, however, everything related to that theme is quickly abandoned. If the rest of the show had been focused on those ideas, it could have recovered and ultimately become something decent. Unfortunately, it ended up going in multiple different directions. Episode 4 focuses on family structures and the hardships related to them. Episode 5 focuses on obsession and isolation. Episode 6 deals with insecurity and feelings of inadequacy. Episode 7 is about…well, actually I don’t even really remember what the Schrodinger’s Cat episode was about. I think it was just an excuse to fill the show with cute catgirls (Haruhiko is the only member of the main group not catified, of course, because that wouldn’t provide fanservice) and to animate a surreal and trippy sequence.

Anyway, the point is that none of these have to do with illusions or faulty perceptions. You can maybe shoehorn that theme in, but there are ways to more easily apply it to other shows. The Tatami Galaxy, for example, is more about the imperfectness of human perception than Phantom World is.

This is ultimately why Phantom World is so bad. I mean, yes, the writing is subpar. And yeah, sure, the characters are bland. Oh, and there’s the constant male gaze. But really, those are just small problems that add up. The big issue is that the series has no core. It’s not about anything. And when your series lacks direction, a bunch of garbage is going to follow.

And with that, I’ll see you all again at the end of the show.