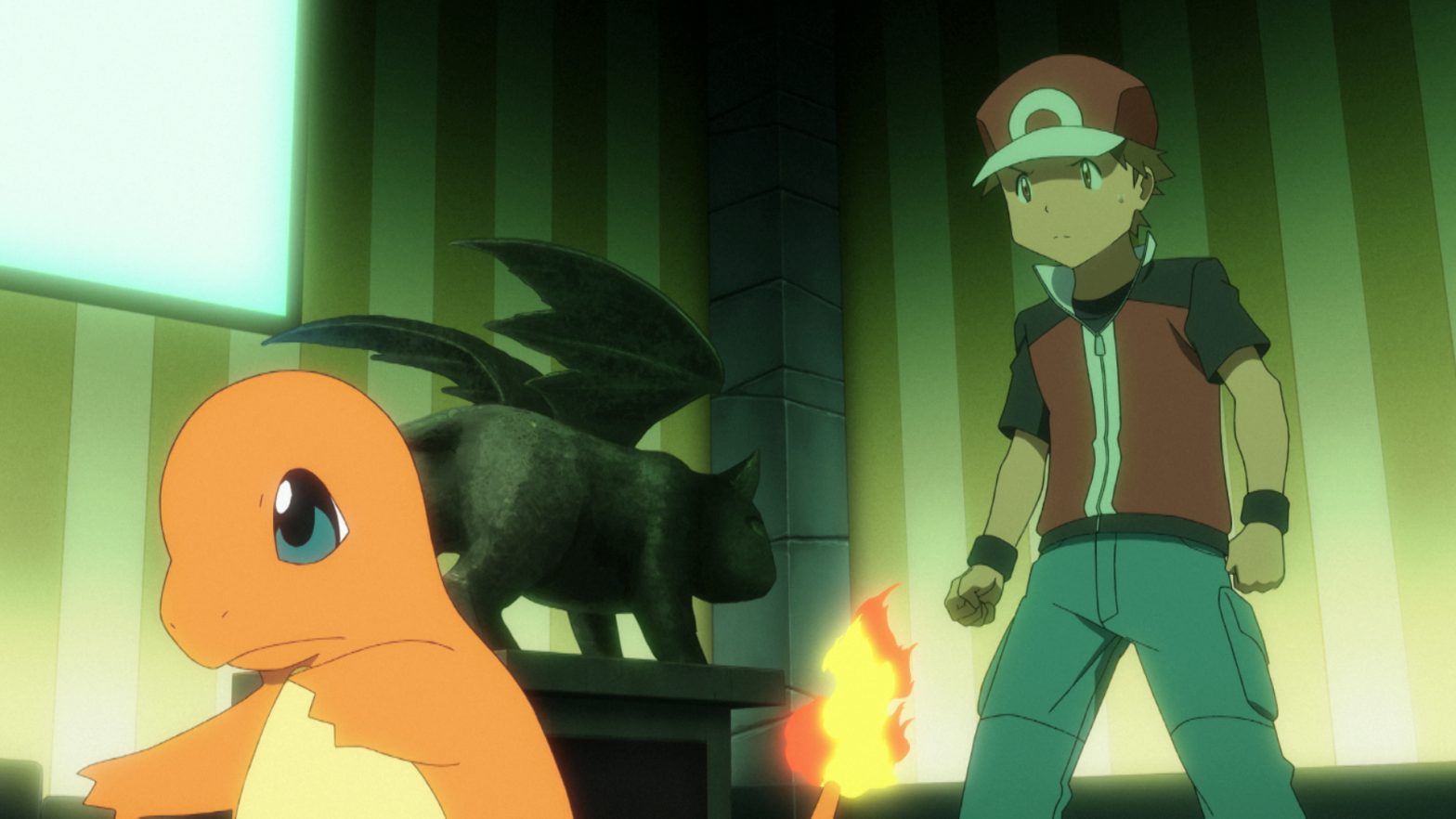 Disclaimer: I have not actually watched much of the Pokemon anime and am largely going by gathered second-hand knowledge and a few random episodes I’ve seen here and there. However, I feel like that little bit of knowledge is enough for me to be able to accurately make the points that support my argument.

When Pokemon Red and Green Versions launched in Japan in 1996, they launched what would quickly become one of the largest franchises of all time. Barely a year after the Game Boy games’ release, an anime adaptation began airing. The anime adaptation managed to make it to North America shortly before the slightly updated (but still infamously glitchy) Red and Blue versions did.

The anime adaptation of Pokemon began to diverge from the canon of Red and Blue fairly early on. The anime’s changes were simple enough at first, and were even incorporated back into the games with Pokemon Yellow, but ultimately, the story ended up going in a very different direction. Eventually, even the characters who appeared in both the games and the anime were given drastically different portrayals. While I’m sure that many young players named their protagonist and rival “Ash” and “Gary” when they first played Pokemon Red and Blue, Arceus help you if you refer to the game characters by their anime counterparts’ names in their presence today. Red’s the badass one. Ash is the annoying idiot. Gary and Blue are both awesome, but we have to distinguish between Red and Ash so we have to distinguish between those two as well.

During the initial Pokemon craze of the late 90’s and early 2000’s, both the games and anime managed to maintain popularity and relevance. The games managed to maintain that relevance by improving on old features and adding new ones. Those who had initially been drawn to collecting and strategy fell in love with breeding and training, and the main game remained simple enough for new players to discover and enjoy the experience. However, the anime failed to maintain the fanbase it once held. Former fans found it repetitive and childish, and were often upset by just how far it had gone from its roots.

These same fans were consequently ecstatic when Pokemon Origins was announced. Origins was meant to be a retelling of Pokemon Red/Blue that remained as faithful as possible to the original games. It promised to be a nostalgic experience for those who were part of the initial craze.

Pokemon Origins was fairly well-received, but I’m going to present a bit of an unpopular opinion here and explain just why it is the inferior adaptation.

Don’t get me wrong: as an adaptation, Origins is far more accurate. It covers most of the events of the games in rough chronological order. It makes numerous direct references to the game. It plays music from the games at the appropriate times, it uses menus and textboxes for stylistic purposes, it refers to Pokemon as having levels and HP, and it even uses lines directly from the games.

However, it is this very decision to remain so accurate that harms the adaptation. In creating a detailed adaptation, it certainly creates a sense of nostalgia, but in focusing on the details, it fails to capture the spirit of the games.

The Pokemon games are fairly sparse in terms of plot, especially in Red and Blue. Their simplicity actually works in their favor. The Pokemon games are not about telling the player an entertaining story. Quite the opposite, in fact. Pokemon’s draw is something referred to by game designers as “emergent narrative.” Instead of telling a story, the games set up situations where players can create their own stories. Many of the most memorable experiences are not the constants, but the variables.

What I remember about Pokemon isn’t the story. I remember my cousin letting me play his Crystal version, catching a Machop, then raising it up to be a Machamp and taking on Bruno’s Machamp with it. I remember finding a Pokeball on the ground and getting excited because I’d managed to find some rare Pokemon called “Ether” (my cousin played along because I seemed so happy and he didn’t want to crush my enthusiasm for the series). I remember buying my own copy and starting my journey. Naming my rival “???” because I didn’t realize that it wasn’t actually supposed to be his name. Hatching a shiny Magby, then losing it when I restarted the game because I didn’t know what shiny Pokemon were yet. I remember, in Emerald, learning about EV training and taking on the Battle Frontier. Spending hours in LeafGreen’s Safari Zone as my cousin and I both tried to catch a Chansey holding a lucky egg, developing the “Chansey Call” to make the grind a little more fun. And I remember watching and participating with thousands of others as we all simultaneously tried to beat the Elite Four in Twitch Plays Pokemon. It’s all these things—the things that are unique to me and my friends—that I love most about the series.

What’s important isn’t how Team Galactic has some harebrained plot to remake the world. The parts of the game that are important depend on what Pokemon the players choose to use and what choices they make in the game. Players identify with the Pokemon they choose because they chose them. The resulting stories become their own. This is why the theme of friendships and bonds between Pokemon are so instrumental to the series.

This is also why it becomes so difficult to adapt Pokemon properly. It may be because of these reasons that the original anime adaptation was so drastically different from the games. The characters based off of Red and Green (Blue) used the alternate default names of Satoshi (Ash Ketchum) and Shigeru (Gary) instead of the “canon” ones. Instead of one of the possible starters, Ash began his journey with a Pikachu.

Both choices seem strange at first, but they also help give players of the game more agency. Giving Ash a Pokemon that players aren’t initially able to choose and providing multiple “canon” names prevents bias, giving players more choice to steer the game in the direction that they want to. You don’t have to choose the Pokemon Ash chose because you’re not playing as Ash and Pikachu isn’t one of the options anyway.

In addition, because the games were so minimalistic in terms of plot but heavy in terms of characters (originally 151, and that’s just the Pokemon!), the anime took time away from the storyline to focus a bit more on other aspects of the world. This was a bit hit-and-miss, because while it allowed for original stories and character development, many of the stories were mere filler, and many characters eventually devolved into caricatures. Much of the anime is just Ash and Company meandering through the world, going on adventures that accomplish nothing and fail to advance the story. However, the time taken to develop the characters is enough to make for some very memorable moments. I’ve heard plenty of people talk about how sad the episodes where Butterfree leaves or where Pikachu almost leaves are.

Compare this to Pokemon Origins. One of the largest issues with Origins is the fact that it is a mere two hours long, but still attempts to adapt a story that takes around thirty hours. This means that material has to be cut for time. As a result, the first episode focuses on Red beginning his journey and learning the basics of Pokemon from Brock, and the latter three episodes focus on the struggle against Team Rocket and Giovanni, ending with the confrontation with Mewtwo. The choice to focus most heavily on the Team Rocket storyline is not surprising, as it had the strongest plot. However, that choice also resulted in some of the most memorable parts of the game being lost. With the exception of the first and last, the gym battles are cut. In addition, the Elite Four battles, apart from the champion battle with Blue, are merely glossed over. Those are understandable. They are some of the most difficult—and consequently most exciting—parts of the game, but including everything would be repetitive. What’s worse is that Charmander’s evolutions to Charmeleon and Charizard happen offscreen between episodes.

The majority of the plot of Pokemon Red and Blue is, admittedly, the Team Rocket bits. However, those exist largely to string the narrative together and to create some linearity. The real meaty bits of the story are the ones the players tell themselves. The games are about creating bonds with your Pokemon. Players remember the teams they play with. Often times, those little bits of collectible data become their friends.

So many people complain about adaptations changing things from the source material, as if it ruins them. But that’s not always true. Different mediums have their own strengths and weaknesses. Things have to be tweaked in order to make them fit into a new medium. And since the Pokemon games are such a player-driven experience, it’s impossible to adapt them without changes. That’s why they made so many changes in the anime adaptation. Ash needed to have an actual personality so that he would be relatable. Battles needed to function differently because a turn-based and stat-based battle system doesn’t play well on the screen. We can laugh at how Ash is an idiot or gripe about how the moves don’t work the same way they do in the games, but those changes need to be there because they translate to a non-interactive medium much better.

This is why the Pokemon anime is actually a better adaptation than Pokemon Origins. Sure, maybe it’s not actually good. It’s filled with dumb jokes, filler, and overused running gags. But it stands on its own. Pokemon Origins requires you to be familiar with the games. It has plenty of nostalgia value, but that’s all it has. It’s an accurate adaptation of the games, sure, but it’s a soulless one. Pokemon is about the adventure. It’s about those little detours on your way from gym to gym. It’s the joy of coming across a rare Pokemon you’ve never seen before. It’s about bonding with your team and taking on trainers, gym leaders, and members of the Elite Four with Pokemon you actually begin thinking of as your friends. And those things? Those aren’t present in Origins. And while the anime may able to replicate them perfectly, Ash gives us a pretty good simulation in his journey.