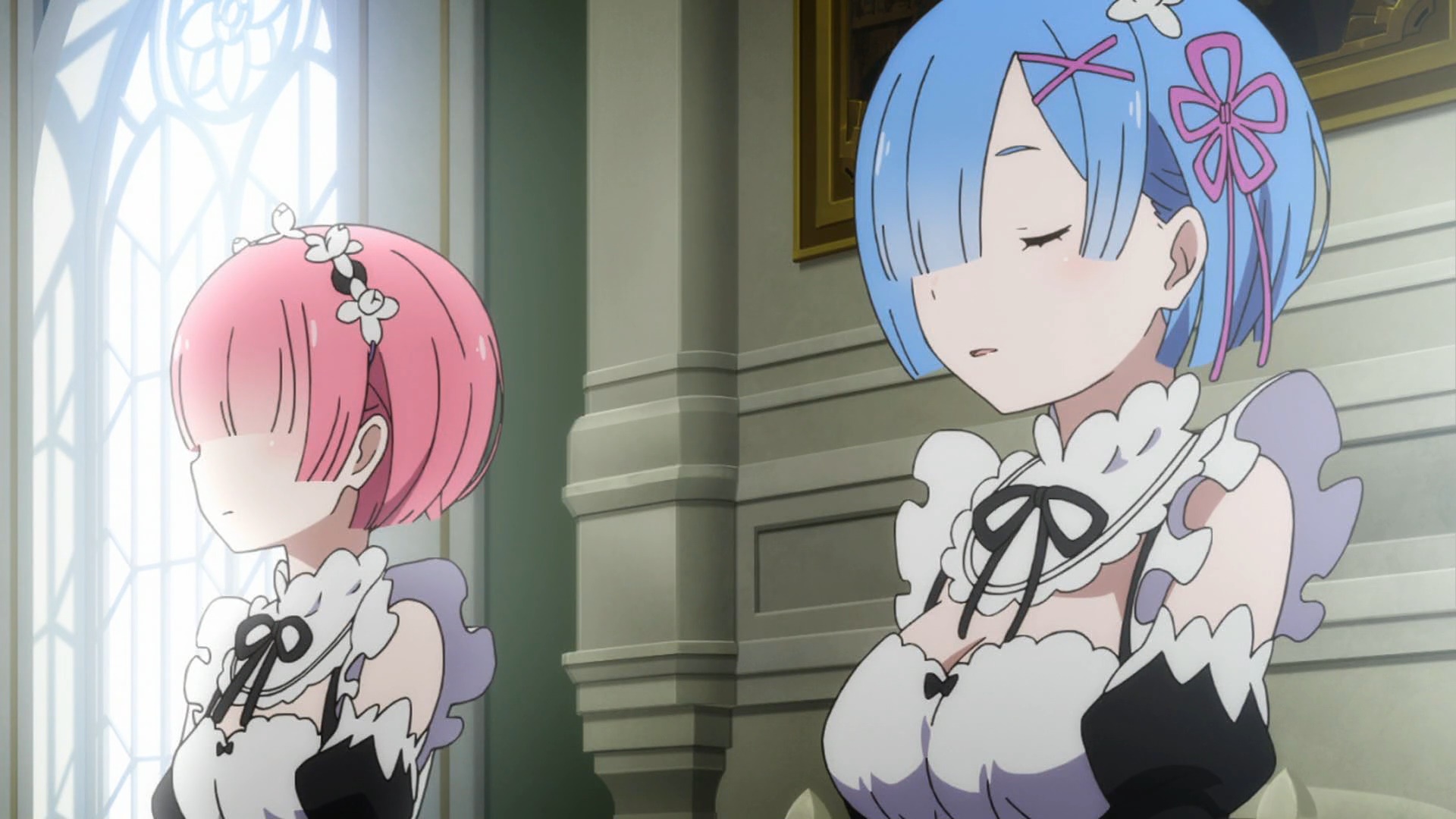 Re:Zero isn’t a show that should work on paper.

After all, it’s yet another light novel about a genre-savvy protagonist who ends up in a fantasy world and ends up surrounded by a bunch of cute girls. Nothing we haven’t seen multiple times a year for the past few years. Even on paper, its gimmick doesn’t seem particularly fresh or groundbreaking. It’s a Groundhog Day loop, a type of narrative so common that I can refer to it as a Groundhog Day loop without having to define the term for most readers. What’s more, the characters aren’t particularly well-developed or compelling, and there’s a whole lot of ugly CG.

And yet, somehow, it works. Somehow, despite it being like so many other soulless things we’ve seen before, the show is actually–against everything I assumed–legitimately compelling.

For those unfamiliar with the series, here’s the basic premise: a shut-in named Subaru ends up getting pulled into a fantasy world. Because he watches a lot of anime, he knows that he is the protagonist and he was clearly summoned there for a purpose, and any moment, a cute girl will show up to tell him of his quest. Of course, the cute girl who does show up has no idea who he is and just ends up enlisting his help to get her stolen insignia back. When they finally track it down, someone has set up an ambush for them, and they get killed.

Then Subaru finds himself back where he was first summoned to the world. Turns out, whenever he dies, he gets taken back in time. That’s the premise of Re:Zero. And it sure makes the damn most of it.

I think what makes the series so enjoyable is that everything feels earned. I’m not just talking about the plot, but the meta of the show. On the surface, Re:Zero is filled with stock tropes that experienced viewers are sure to roll their eyes at. However, though it ends up setting up and using a lot of tropes, it works hard at ultimately subverting them and making them entertaining. Perhaps most notable is the show’s approach to characters. When Rem and Ram appeared, they had me rolling my eyes. Great. Cute, ambiguously loli twin maids. The older one is inept and lazy and the younger one is super-competent but they’re otherwise exactly the same. Got it. I know literally everything there is to know about these characters now.

As the arc went on, however, it ended up doing a really deep dive into what I had written off as fanservice characters. By the end of the second arc, Rem and Ram were very much distinct, individual characters with different goals, motivations, and (to an extent) personalities. In fact, the second arc was hugely centered around the relationship between these two characters who I had assumed were just there to give the doujin writers something to do. And the show had earned it through hard work in the form of some really well-done character development.

This feeling of everything feeling earned is something that extends to Subaru himself. Subaru isn’t necessarily one of the best protagonists I’ve seen, but he’s definitely the most impressive Generic MC-kun I’ve seen in a long time, if not ever, just because he works so hard all the time. He’s your average proud genre-savvy hikikomori, i.e., the type of guy you’d expect to be dropped into a power fantasy, but in this case, the power fantasy works because he legitimately is just a normal guy. He doesn’t naturally excel at everything he does. While he’s far stronger and more adept at combat than you’d expect, he does explicitly state that he’s put himself through training in the past and he is shown exercising, so not even that comes naturally. No, what makes the self-insert power fantasy work so well with Subaru is the fact that he’s incredibly hard-working, and everything he achieves is a result of that. Gathering information and solving mysteries is the result of trial and error and learning from his past mistakes. He’s surrounded by plenty of cute girls, but he has to work to build relationships with them, and when time is reset, any progress he made with them is reset as well.

To give you an example of what I mean, after Subaru’s first time reset, he tries to make contact with the silver-haired girl he’d been helping and discovers that Satella was a fake name she’d given him, he goes through hell desperately trying to save her life, as well as the lives of a few other people, dying a few more times in the attempt. That’s why, at the end of episode 3, after several deaths and one last near-death experience, it feels so rewarding to finally learn Emilia’s name. He worked so hard just to get her to introduce herself to him properly. And it’s hard not to respect that.

At a later point, Subaru’s life depends on how much he can get the twin maids Rem and Ram to trust him, and works himself to exhaustion, trying to keep a cheerful face up. He finally breaks down and falls asleep crying with his head on Emilia’s lap. This breakdown was something I personally felt relatable, and I’m going to make an assumption and say that we’ve all probably had a similar experience at some point in our life. We all bottle our suffering up and hide it from others, and sometimes, it finally just reaches a breaking point. But not only is this moment relatable, it also reinforces just how hard Subaru is working and manages to progress his relationship with Emilia naturally–and again, because of how hard Subaru has been working, it feels earned.

Re:Zero isn’t the best show out there, and it’s also only half finished. There’s plenty of time for it to take a nosedive. But it’s a show that’s won me over, and it had to work really hard to do so. For the first few weeks of its airing, I had to struggle with myself as I confronted the idea of enjoying a show that was so obviously a bad and generic one. But it’s not. It can be a bit generic, sure, but it’s not bad. Its heart, and the pure amount of effort you can see being poured into the storytelling, has made it an incredibly enjoyable watch so far. And if it starts to lose me, I know that there’s probably a good chance it can win me back again.