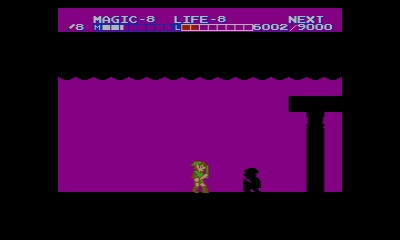 Welcome back to The Great Zelda Playthrough, in which I play through all the Zelda games in release order to prepare for Breath of the Wild. If you want to start from the beginning, check out the post I wrote about the first game. This one’s about Zelda II: The Adventure of Link.

In my previous post, I said that the first Zelda game is the hardest for me to put into perspective. Putting Zelda II into perspective is relatively easy, but it’s easily the hardest one to evaluate objectively, just because it’s so different from every other entry in the series. Zelda II is the black sheep of the Zelda franchise. It was a game that took a drastically different approach to gameplay that really hasn’t been replicated in any other Zelda game.

Every other Zelda game is either top-down or in a 3D world. Zelda II’s overworld is top-down, yes, but all the encounters, towns, and dungeons are sidescrollers. This makes it the only sidescroller in the series (those two entries in the Unholy Triforce don’t count). It’s an incredibly different kind of combat since it’s reliant on blocking, dodging, and striking at openings rather than positioning or targeting weak points. You get experience points and level up. You collect spells instead of items. Heart Containers are still around, but they extend a more traditional-looking life-bar. And you have 3 lives, which can be extended with a few extra lives (which are only collectable once).  It’s…really weird. I’d say it does still have some of the Zelda spirit to it, but it has just as many similarities to the NES games Metroid and Castlevania as it does to the game it’s apparently a sequel to.

So Zelda II is very, very different. Does that mean it’s bad? Not necessarily. But it means it doesn’t quite feel like a Zelda game, which makes it really hard to compare to other Zelda games.

Let’s get right into what it’s about, though.

Zelda II is the direct sequel to the first game and stars the same Link, but a different Zelda. This is because the story actually begins before the events of the first game. The backstory is basically that a king of Hyrule thought his son wasn’t quite trustworthy, so he secretly entrusted the Triforce of Courage to his daughter, Zelda. The prince wasn’t pleased about this, and suspected Zelda was hiding the Triforce from him. The wizard helping him interrogate her put her into a deep sleep. The prince instantly regretted his actions, placed his sister on an alter and decreed that all girls born into the royal family would be named “Zelda.” Of course, as might be expected from such an emotional character, Hyrule did not exactly prosper under his reign. So begins the Era of Decline, which lasts through the first Zelda game and Zelda II.

The game itself picks up six years after the first game with Link, now 16, receiving a mark similar to the crest of the royal family on his left hand. Impa tells him of the sleeping princess Zelda I and sends him on a quest to place 6 crystals in 6 palaces in order to retrieve the Triforce of Courage, complete the Triforce, and use it to awaken Zelda I.

Meanwhile, Ganon’s minions are attempting to revive Ganon by killing Link and sprinkling his blood over Ganon’s ashes. If link fails, not only will Ganon be resurrected, but there will be no hero to step in and stop him.

Zelda II may not have been when the franchise really came into its own (that would happen in A Link to the Past), but it is when it began developing lore and solidifying its tone. It establishes Link, Zelda, and Ganon as recurring characters bound by the Triforce. Zelda and Ganon had already been established as the bearers of the Triforce of Wisdom and Power respectively, and tying Link into that trio by bestowing the Triforce of Courage on him is what begins to turn the Zelda franchise from a story to a true legend.

These three characters are also linked with the theme of awakening. There is, most obviously, the literal awakening from her slumber that Zelda I awaits. Ganon, while physically absent from the game, is still present in the threat of a resurrection, or a reawakening. But the awakening at the heart of the story is actually the less obvious one Link goes through. The mark of the Triforce appearing on Link’s hand at the age of 16 sets into motion a coming-of-age story. He does not actually receive the Triforce of Courage at that time. He is merely recognized by it. He must undertake the journey to obtain it himself, ultimately battling his shadow, cleansing himself of any darkness within his heart, before he is ultimately seen as worthy. At the end, he receives a kiss from Zelda, an indication of sexual maturity that once again reaffirming that this story has been about Link coming into adulthood. Link’s story is an awakening too: an awakening of his true power and potential.

Zelda II would be a bit easier to evaluate if it had added a lot to the series. But no, most everything it adds are utilized in weird ways. It adds a magic meter, sure, but only A Link to the Past had anything remotely similar in terms of utilizing spells. Almost everything else in it was made famous by later entries. The sages in Ocarina of Time are named for the towns in Zelda II. Ocarina of Time’s Dark Link is also the far more well-known incarnation of Shadow Link, the final boss of Zelda II. Apart from that, there’s almost nothing. No recurring characters or bosses, and the only recurring enemy that originated in this game is the Iron Knuckle…which in this game looks and functions more like a Darknut.

Even in terms of story, the only real impact it’s had is that it was one of the factors making the timeline really confusing, to the point that, when making the official timeline, Nintendo had to say “yeah, that ‘first Zelda’ bit? She’s not actually the first” and bend the original story a little bit.

The one impact is the inclusion of the Triforce of Courage. This is huge not just because it sort of “completes” the Triforce, but because it ultimately becomes the glue that ties the fates of Link, Zelda, and Ganon together. That’s the real impact Zelda II has had.

But apart from that? Ehhh…?

Just like the first game, I played Zelda II on the 3DS Virtual Console. Apart from Triforce Heroes, Four Swords Adventure, and maybe Four Swords (not quite sure on that one), Zelda II was the only game in the main series I had never beaten, and for good reason: it’s really, really hard. I really would’ve loved to play the whole thing as it was originally intended, but since there are 17 games in the series I needed to beat before Breath of the Wild, I didn’t feel too bad about not keeping it OG, especially since the Virtual Console did include a save-state to abuse. I only really abused it during the awful trip through Death Mountain, fights with several bosses, the run up to the Great Palace, and, of course, the Great Palace itself, Thunderbird, and Shadow Link. And yes, I did use the “corner crouch” to beat Dark Link. But I at least made sure to put in a valiant effort before resorting to it.

Those parts I mentioned earlier were by far the worst parts of the game. It actually began to get easier, for the most part, at the end of the game. Maybe that was because I got better at it. Maybe it was because I was a higher level. Maybe a combination of both. But most of the game still did a pretty good job of kicking my ass. I don’t think I made it through a single palace without seeing “GAME OVER, RETURN OF GANON at least once. Island Palace, the third palace, was particularly rough on me.

This game, for me, was all just about overcoming its difficulty. It’s a challenge, and I wanted to beat it at least once. I didn’t really stop to talk to anyone or explore at all, but there isn’t much to do for either of those things anyway. It was all about following guides and just getting through it.

Zelda II gets a lot of crap for being hard and different. And I don’t want to be that guy. I really don’t want to be the guy who says negative things about it. But upon beating it, my first thoughts consisted of two words: “Never again.” I want to give it love, but apart from the challenge, there’s really not a whole lot of reason for me to ever replay it. It doesn’t add a lot to the series, there’s nothing particularly iconic about it beyond the Shadow Link fight (which is actually quite great and memorable), and it just doesn’t quite feel like a Zelda game because it doesn’t play anything like other Zelda games.

It’s a challenge, and some people will really like that. And maybe it’s good. I don’t play games for the challenge and I can’t speak to the type of gameplay that it offers. Maybe it’s a legitimately good game for some people. But it just doesn’t feel like a Zelda game.

I will say a few things in its favor. First, the fight with Shadow Link is great in concept and, as it’s become one of the more infamously hard boss fights in gaming history, ends up getting the respect it deserves. Second, the story of Link coming into his own, which really only dawned on me upon reflection on the game, is good. And finally, it has the most criminally underrated soundtrack in the series. It’s all very solid music, but it’s so frequently forgotten. Everyone knows Fairy Fountain, Gerudo Valley, Dragon Roost Island, etc., but even most Zelda fans will only know the Palace Theme from its use in Super Smash Bros.’ Hyrule Palace stage. The Title Theme is actually one of my favorite tracks in the series.

Still, I’m rating these games by how much I enjoyed them, and a big part of that is how much I feel they encapsulate the spirit of Zelda. I don’t imagine Zelda II will get much higher than the bottom. Just don’t let that dissuade you from actually giving it a try yourself.

For now, though, there’s not a lot to rank it against, and between the two I’ve played, there’s a clear winner. So here’s our ranking so far:

And with that…I finally get to move on to one of the most well-regarded games in the series. Perhaps the game that most codified Zelda and made it the name it is today.

It’s time to start on The Legend of Zelda: A Link to the Past.