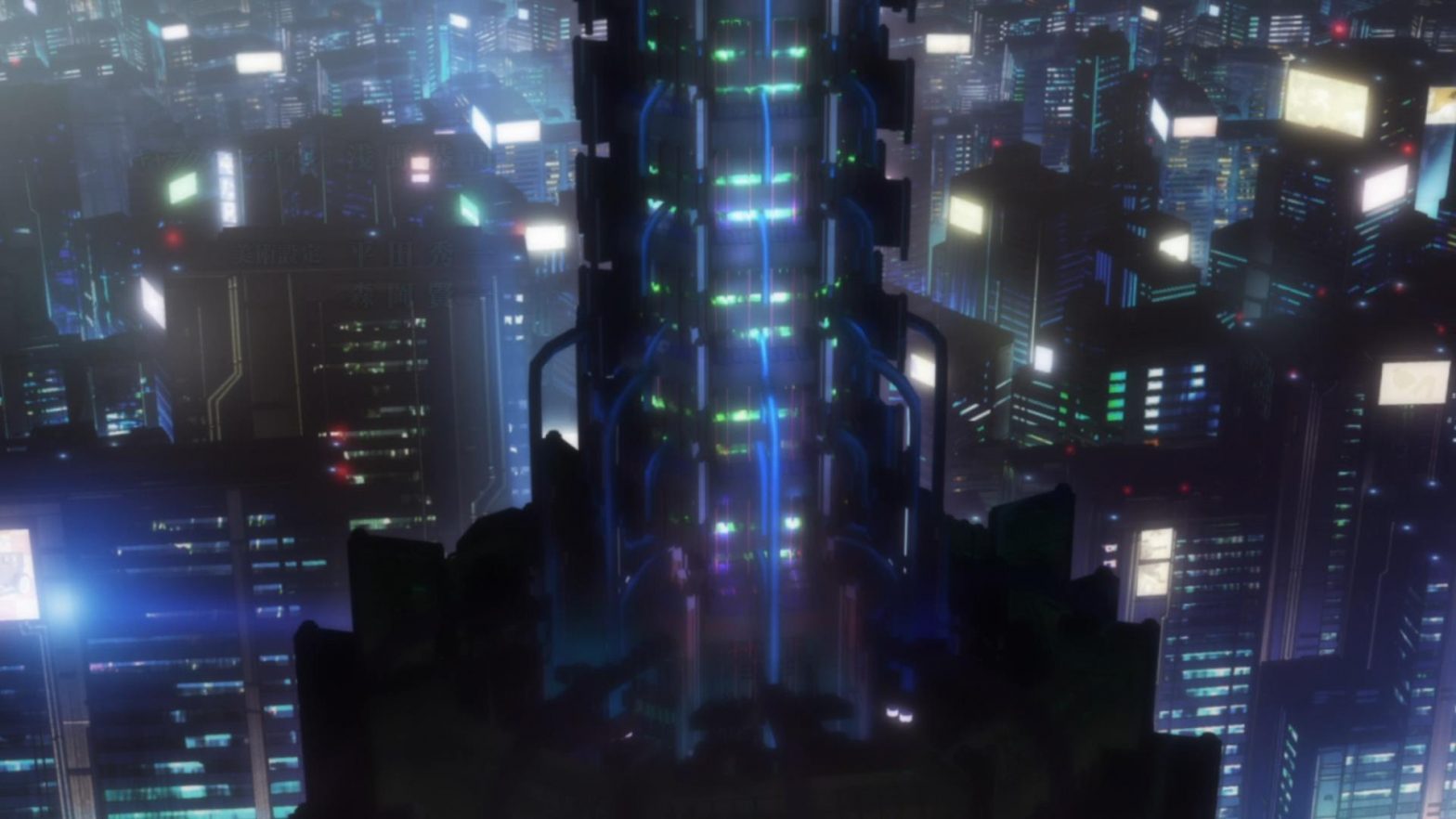 Perhaps the most common misconception about Psycho-Pass is that it depicts a dystopia. A dystopia, by definition, is an unpleasant or undesirable society. Perhaps a select few lead good lives, but in a dystopia, the majority of society is in ruin. It is easy to mistake Psycho-Pass as depicting a dystopia, as it focuses on the negative aspects of the world and the series explicitly references a large number of dystopian works, such as George Orwell’s 1984 and Phillip K. Dick’s “Do Androids Dream of Electric Sheep.” What it portrays is actually a utopia, just one that unfortunately comes at the expense of a few. However, viewed from a purely utilitarian standpoint, the Sibyl System has provided the ideal society. In fact, the chief of the bureau herself quotes Jeremy Bentham almost directly when she says in episode 13 that the Sibyl System has “achieved the greatest happiness for the greatest number of people.”

The Setting of Psycho-Pass

I am about to embark on a fairly ambitious project where I plan to dive deep into the philosophy in Psycho-Pass on an arc-by-arc basis, so I think briefly establishing the world is important before I jump into everything. Psycho-Pass takes place in a futuristic Japan where the Sibyl System measures people’s mental states and the tendencies of their personalities. If someone’s “psycho-pass” gets clouded, causing their crime coefficient to rise, they become targets for police action. It is a place where Sibyl’s analyses are able to reliably prevent or halt crime. It is, as much as possible, a peaceful society, free of stress, where Sibyl has matched everyone to the jobs they have the most aptitude for and the partners most suited to them.

The story focuses on Akane Tsunemori, who becomes an Inspector for the Ministry of Welfare’s Public Safety Bureau (MWPSB). The MWPSB is tasked with hunting down and subduing those whose Crime Coefficient has become dangerously high. It is a system intended to prevent crimes, in the vein of Minority Report. Working under the Inspectors are the Enforcers, those who have high Crime Coefficients and are labeled “latent criminals,” but who have the potential to be detectives. Enforcers are generally treated like dangerous hunting dogs that need to be leashed and are meant to do the dirty work so that Inspectors can stay out of the line of danger and do not have to worry about darkening their hues.

These are the basics of the world seen in Psycho-Pass, and while the story focuses on the darker elements of this society, the overwhelming majority of it is actually quite ideal. In fact, even these darker elements hint at a much more positive ones, such as the Sibyl System’s focus on helping citizens maintain good mental health and its attempts to prevent crime and reform criminals rather than simply imprison or kill them.

The structure of Japan as portrayed in Psycho-Pass is actually fairly similar to the society Plato proposes in The Republic. As the show itself makes references to Plato’s philosophies (and “sibyls” were Greek oracles, so the Sibyl System itself is a reference to Greek culture), it is almost certain that writer Gen Urobuchi is familiar with the work, and I do not think it is too much of a stretch to assume he had it in mind while crafting the world. It is a world where people are given purpose and meaning in life by dedicating themselves to what they are most suited to do, it is ruled by a wise philosopher-king (Sibyl) and is protected by guardians in the form of Inspectors and Enforcers. However, Psycho-Pass also heavily critiques this proposed utopia by examining what exactly the cost of a Republic would be.

There is a short story by Ursula K. Le Guin called “The Ones Who Walk Away from Omelas.” It is a very short piece in which the narrator proceeds to describe a perfect society called Omelas. It is a society filled with joyful and happy people who are not being brainwashed and are not just ignorant simpletons. The narrator paints this scene for over half the piece. When they sense the reader still suspects a catch, they reveal it: in order for this perfect society to exist, a small child lives its life locked in a basement, unloved and malnourished, wallowing in its own filth. The existence of that one child is what allows Omelas to be such a perfect society. Neither how Omelas can be such a utopia nor how the child’s suffering allows that to be is explained, because it is purely a thought exercise: one where the pain and suffering of a single innocent allow for the continued bliss of everyone else in Omelas.

Everyone in Omelas knows of the forsaken child. They learn of it at some point between the age of eight and twelve, when they are able to grasp the idea. Many go to visit the child and want to do something for it, but they know that if they were to do so, it would undo all the goodness that exists in Omelas. The story ends by saying that, while almost everyone who goes to visit the child returns to their life and eventually reconciles the need for the child’s suffering, there are some who instead walk away from Omelas. An unspoken question hangs in the air: if you were in that position, would you? When speaking from an outside perspective, it is easy to say that the moral thing to do is to leave. That no life, no matter how perfect, is worth the price of a child’s suffering. Simply leaving does not harm anyone. You are merely choosing to take an imperfect world upon yourself.

But if it were that simple of a choice, why do so few walk away? Why do so many stay? Saving the child is not an option because it saves one at the expense of so many others, but can walking away from the situation bring peace of mind? After all, walking away does not ease the child’s suffering, and it does not bring any more happiness to others. So if your decision cannot affect the child or other citizens of Omelas, it will only have an impact on you. What can you live with?

This is what Psycho-Pass is about. It is about the Sibyl System, the entity that allows the prosperity of Omelas to exist. It is about Shogo Makishima, those he influences, and the Enforcers, all of whom are the forsaken children who pay the price for Omelas’s happiness. And it is about Shinya Kogami, the one who walks away from Omelas, and–perhaps more importantly–Akane Tsunemori: the one who stays.

[Edit/Addendum: I have had some response insisting that as a utopia is perfect by definition, Psycho-Pass would depict a dystopia. It has consequently become necessary to elaborate. If a utopia can only be defined as a perfect society, it becomes impossible to define a utopia as anything other than an idea. In practice, it is simply impossible, as it requires every member of that utopia holding the exact same values in order to function. Anyone believing in an ideal that goes counter to a proposed utopia’s ideal consequently destroys that ideal. From their perspective, it becomes a dystopia.

While I can only speak from an American perspective, I believe I can assume that Psycho-Pass depicts a society that is objectively better than almost every current human society. It is a world where crime is low and where there are measures in place to ensure that police are unable to shoot a criminal unless they pose a danger to themselves or others, as well as further measures to provide as few fatal shootings as possible. It is a world where mental health care is seen as a high priority. Crime is low. Work gives people purpose and compatibility tests are able to provide appropriate companionship. These things do not work quite as well as intended or they would on paper, due to human nature (which is a focus of the show I will delve into heavily when it becomes relevant), but to define a society that is better than our current society as “dystopian” simply because it is not perfect is not a stance I am willing to take. As the world of Psycho-Pass is modeled off of utopian societies like the Republic and Omelas, I feel like categorizing it as one is acceptable.]