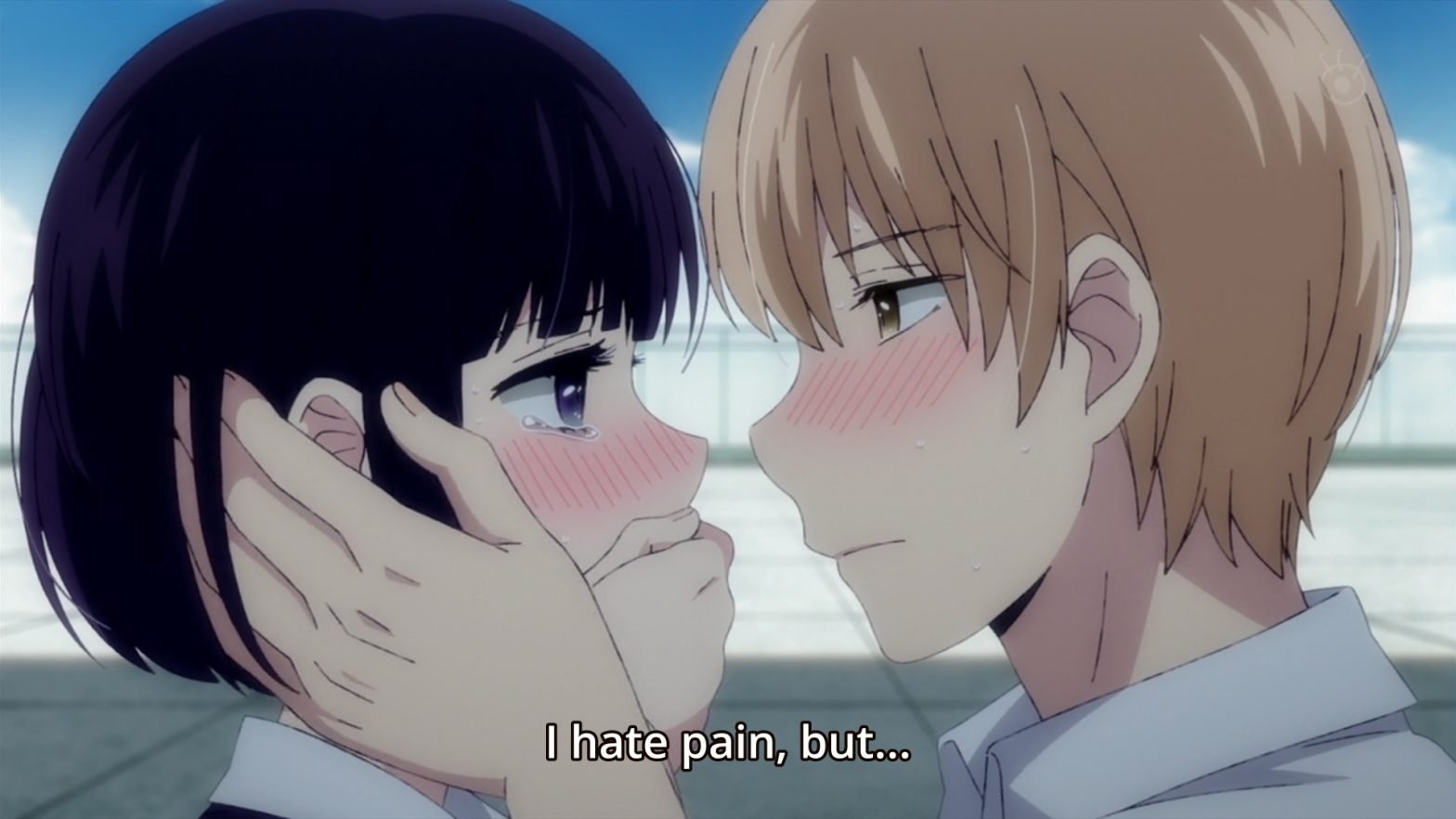 When rereading Ursula K. Le Guin’s “The Ones Who Walk Away From Omelas” for my first Philosophy and Psycho-Pass post, I rediscovered a quote from it that stuck with me the first time I read it and that stuck with me again: “The trouble is that we have a bad habit, encouraged by pedants and sophisticates, of considering happiness as something rather stupid. Only pain is intellectual, only evil interesting. This is the treason of the artist: a refusal to admit the banality of evil and the terrible boredom of pain.”

Why do I bring this up? Well, because it’s basically impacted the way I’ve viewed Kuzu no Honkai, AKA Scum’s Wish, which as of this writing, is five episodes into its anime run. This Le Guin quote is basically the antithesis of Scum’s Wish, a show whose thesis is basically “Pain and suffering are tragically beautiful.” While most people have been praising Scum’s Wish (and rightfully so, as it’s a very well-produced show), I’ve been hesitant to do so.

Scum’s Wish is a love letter to angst and the great tragedy of love. It’s filled with all sorts of taboo relationships and love triangles. Hanabi loves her homeroom teacher and older brother figure Kanai, who loves his fellow teacher Akane, who is loved by Mugi, who is in a relationship with Hanabi. Hanabi and Mugi both know that they’re in a relationship as a way to cope with their unrequited love. Also, Hanabi’s friend Ebato is a lesbian in love with her, and the two start sleeping together on the side (though Hanabi’s reasons for doing so don’t seem to be a reciprocation of love), and Mugi is reconnecting with the ex-girlfriend he lost his virginity to. Oh, and while Mugi loves Akane, he seems to be actively choosing not to get involved in a sexual relationship with her, despite the fact that she’s willing to strike up relationships with plenty of different men, because he doesn’t want her to manipulate him. And a childhood friend of Mugi’s is also desperately in love with him, though she has yet to enter the mix in any meaningful way. It’s all played completely dramatically, but when it’s laid out like this, the sheer level of things becomes almost absurd.

So why this choice? What is it meant to say? What is it meant to accomplish? It doesn’t feel like a carefully constructed relationship web as much as it feels like an example of throwing in new complications to draw the story out as long as possible. There’s no plot beyond the relationships. We don’t use these relationships to delve into the characters or their psychology in any meaningful way. Characters don’t grow or develop. And most all the characters are fairly loathsome. The series is called “Scum’s Wish” after all. So we’re not supposed to root for these characters. So what’s left?

We’re meant to pity them. We’re supposed to see the pain they’re going through and feel sad about it. We’re supposed to look at these loathsome people, see the darker parts of ourselves in them, and hate ourselves. Nobody is happy watching Scum’s Wish. Nobody’s learning anything. It’s meant purely to be an emotional, cathartic release. It’s a romantization of pain and suffering. We feel pain when watching it, because what we feel isn’t as important as how potently we feel. As a result, pain becomes something to be romantic. It becomes desired. I’ve had people argue with me on this point, but I think it’s pretty damn hard to refute when the show itself explicitly has Hanabi express that pain feels good in episode 5.

And it works. That’s the most disgusting part of Scum’s Wish. I can go on about how I think Scum’s Wish is as manipulative and morally bankrupt as its characters, but despite that, I still feel like it’s a beautiful show. I can look at it and break down the elements of why I think it’s bad, but I’m still enjoying it. I get swept up in the pain and self-loathing the show encourages, and gladly so, because I feel like I’m scum too.

“Only pain is intellectual, only evil interesting.” That doesn’t have to be true. Slice-of-life is a huge genre in anime and manga, and it’s a genre all about finding joy in the simple and mundane. While it’s not necessarily my genre of choice, it still contains some of my all-time favorite series. So why? Why is it that, when there are so many alternatives, we’re so drawn to pain? Why do we love evil? Why do we embrace being scum? Honestly…I don’t even know where to start looking for the answer. All I know is that, despite my better judgment, despite everything I’m saying, I still like Scum’s Wish. And that makes me hate it even more.

But that’s okay, because it’s a painful, beautiful hatred. A pain that feels good.